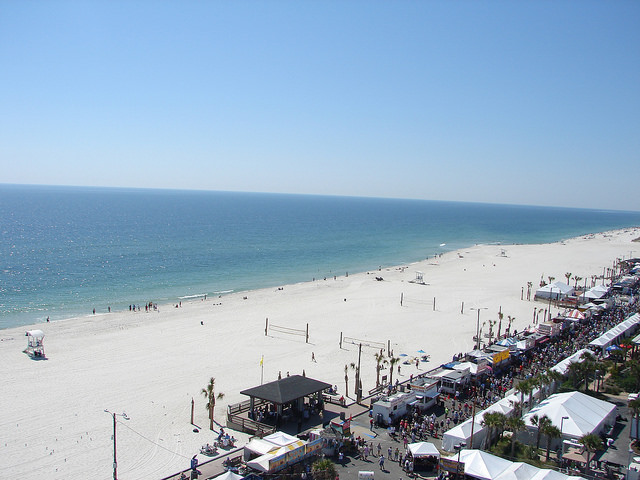 The Annual National Shrimp Festival has been a tradition in Gulf Shores, Alabama for over 40 years. The thought of delicious Royal Red shrimp from the Gulf and tantalizing Southern side dishes being served on the festival grounds on the beautiful white-sand beaches of Southern Alabama are more than enough to keep people coming back year after year - keep reading to find out fun facts by the numbers about the National Shrimp Festival.

The Annual Gulf Shores Shrimp Festival was recently ranked the #7 "Best Festival" in the Southeast as recognized by Southern Living Magazine. It also has the distinction of being one of the top 5 tourist attractions in the state of Alabama. It is definitely the place to go in the fall in Alabama, and our Gulf Shores condos and Orange Beach vacation rentals are right in the heart of all the action!

How It Started
Fun fact - the Annual National Shrimp Festival was founded in 1971 as a way to extend the busy summer tourist season by doing something in October that would attract families and other tourists. In its infancy, the festival drew 100 locals and a few local artists with easels. Fast forward to the present day and attendance is in the 300,000 range with over 300 vendors. There are normally 2 stages with over 45 different acts playing over a 4-day jam session.

Festival Events
Another popular event is the "American Idol"-inspired Shrimp Fest singing competition, which is sponsored by Brett-Robinson. Young people from schools in the area compete for 3 scholarships to colleges of their choice in this contest styled after the show "American Idol." There is something for everyone to enjoy at the Annual National Shrimp Festival. The children's activity village hosts many things for the children to get their hands on and enjoy! Arts and crafts, face-painting, games, entertainment, and much more! There is also a sand sculpting contest and a 5k/10 walk/run race that is always held during the Annual National Shrimp Festival. Both of these events are very popular and a great way to get involved in all the festival has to offer.

The Food
The star of the show of course is the SHRIMP! The highlight of the festival is the 200 pounds of shrimp prepared per day by some of the area's finest chefs. Of course, who would want to miss the annual "Best of the Fest" restaurant challenge where the best Alabama Wild Shrimp dish will be recognized and awarded. The award goes to the most original, local, and delicious shrimp dish. Sponsored by Zatarain's, the dish must use one Zatarain's product and wild local shrimp. Past prize-winning dishes include pan-seared Alabama Gulf Shrimp, Zatarain's Jambalaya Arancini, Broccolini, and Tasso Creole Corn Cream by Chef Brody Olive of Coast Restaurant at the Beach Club. Be adventurous and try the unique creations that the chefs have created specifically for this festival!

The People that Make It Possible
The national attention this festival receives requires the time of many people to make it run smoothly. There are over 600 volunteers who help make the Gulf Shores Shrimp Festival happen, while the Chairman of the event dedicates about 400 hours a year to the event, which equals about 10 weeks of full-time work.

This type of dedication by the people of coastal Alabama has highlighted the Annual National Shrimp Festival as one of the finest events in the nation! Come on out in October and enjoy all that this great event has to offer!