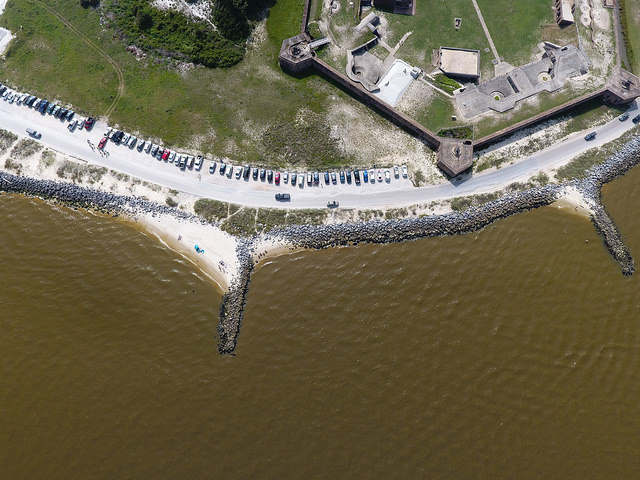 Fort Gaines, located on Dauphin Island near Gulf Shores, is a famous historical marker and attraction that is almost 200 years old. It's a great way to add variety to your beach vacation at one of our Orange Beach condos or Gulf Shores rentals without ever losing sight of the water. The fort was named after General Edmund Gaines for his service and recognition as a war hero during the War of 1812. Construction began on Fort Gaines in 1821, but because of its location so near the water, the tides often flooded the foundation and funding ran out on multiple occasions. The fort was not fully completed until 1861. It is now one of the nation's most well-preserved Civil War era forts. It's also on the list of America's 11 Most Endangered Historic Places due to hurricanes and sand erosion.

Fort Gaines is most famous for its involvement in the Battle of Mobile Bay during the Civil War. The Battle of Mobile Bay lasted throughout most of the month of August of 1864 when the Union Army and Navy attacked the three forts of Mobile Bay to take control of the important strategic location. On August 3, 1500 Union troops landed on Dauphin Island and moved towards the fort. The attack from sea began on August 5th led by Admiral David Farragut from his flagship, the USS Hartford. Farragut is famous for his command during this battle, yelling, "Damn the torpedoes! Full speed ahead!" The Union army and navy bombarded the fort for three days. Colonel Charles Anderson finally surrendered after realizing they could not defeat the Union troops on August 8, 1864.

At Fort Gaines, Alabama you'll find the original Civil War cannons, a blacksmith shop, old-fashioned kitchens, a museum with uniforms and other artifacts, and a gift shop. Also on display is the anchor from the USS Hartford, which was used during several Civil War battles in addition to the Battle of Mobile Bay including the Battle of New Orleans and the Battle of Vicksburg.

You can also schedule a guided tour of the fort and see its various rooms and tunnels. The tour guide is dressed in uniform appropriate to the time period. During the tour you will be given a cannon-firing demonstration as well as a blacksmith demonstration.

Fort Gaines in Dauphin Island, Alabama is just a short drive from our Gulf Shores condos and Orange Beach rentals and is open from 9am to 5pm daily and is closed on major holidays. Admission for adults is $6 and admission for children ages 5-12 is $4. Group discounts are available. Call ahead for tours by contacting Melinda at 251-861-6992