The Blue Marlin Grand Championship of the Gulf 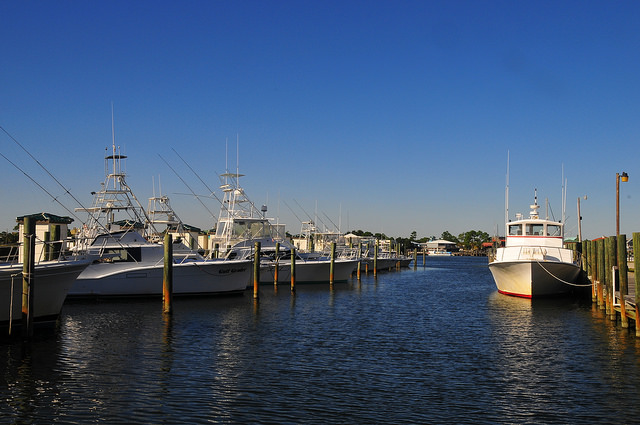 In an area known for its great fishing, one of the biggest sport fishing tournaments of the region happens in Orange Beach, Alabama every July. The Blue Marlin Grand Championship of the Gulf was ranked among the Top 20 Events in the Southeast by the Southeast Tourism Society and is also known by sport fishermen as the ultimate fishing tournament. The amount in cash prizes awarded to the winners speaks to that, as well as live TV coverage, interviews with captains and crews, light shows, and a massive weigh-in event with festivities surrounding the event.

Our Gulf Shores condos and Orange Beach rentals are the perfect place to stay while you watch or participate in some spectacular fishing - and the partying! In order to get you started on the planning, here is some information about what you will see and experience when you stay in Gulf Shores or Orange Beach for the tournament.

For starters, the Blue Marlin Championship of the Gulf is held at the beautiful Wharf Marina. The Wharf is a premier event venue that is packed with entertainment during the Blue Marlin tournament. There are great restaurants, bars and a music venue with headlining acts. There will always be something to do for you at The Wharf, which is one of two entertainment districts in Orange Beach. The festivities usually begin the Tuesday evening prior to the tournament with early boat arrival, food and drinks and parties. This is a great time to get in early and scout out all the things to do around The Wharf.

The second day consists of team check-ins, tournament rules, and more parties! There is a fashion and cocktail party for the fashionistas in your group, and there are private events for fishing teams, such as a kick-off dinner and party, followed by the Miss Billfish Contest on the tournament stage. The next day the tournament begins.

Of course, if you plan to participate in the Blue Marlin Championship there are a few things you need to know. The tournament has a strict limit on entries every year, and the first 40 boats to register are guaranteed dockage in the Wharf Marina. The entry fee is around $7,000 with a down payment of $1,500 due at registration. If that seems a bit steep to you, think of the prize money that is on the line.

Cash awards for the winners depend on how many boats enter the tournament. The 1st and 2nd place winners get well over $100,000! In addition to the cash prizes for blue marlin, fishermen can also enter optional fishing contests for wahoo, dolphin fish and tuna. Total cash prizes in the past have been well over $200,000 for 1st and 2nd place teams.

There is live coverage of the tournament by the local NBC channel during a couple days of the tournament. Have your friends look for you and follow your boat!!! The weigh-in is also filmed and broadcast live and is considered one of the greatest shows in sport fishing - a 700-pound marlin is nothing to sniff at! All the fun and festivities wrap up on Sunday with the awards ceremony and Gulf Coast Triple Crown Championship breakfast.

If you can't make it this year, start planning a spectacular trip for next year at our Gulf Shores condos or Orange Beach rentals and either be a spectator or a participant in the Blue Marlin Grand Championship - some fantastic Gulf Coast fishing will be waiting for you!