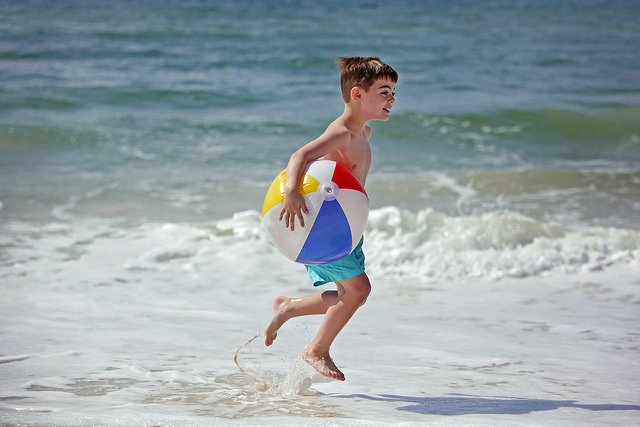 There's more to do on a beach than just lounge with a book or splash in some waves. In fact, if you're someone that can't stand being still for more than a few moments, then the beach is a perfect place to go! There are plenty of fun beach sports to play to keep your blood pumping, your adrenaline up, and your competitive side engaged.

Kadima
Try your hand at Kadima (better known as paddle ball). You can find the paddles and balls in any number of stores near the beach, including souvenir shops and chain stores. It's a traditional beach game that is easy to pick up, and if you're any good at ping-pong or tennis, you can show off your skills. The equipment is cheap and minimal, making it an ideal beach game.

Football
You can also play some rugby or football in the sand if you have a larger number of people wanting to join in on a game. If you have a smaller group, the ball can be tossed around, or used for a game of monkey-in-the-middle. Nothing more than just a ball is needed, so much like Kadima, it's an easy beach sport to play.

Frisbee
Frisbee is another game that's easy to set up and play, with the potential numbers ranging from a pair to a large group. With a Frisbee, you don't have to worry about water damage, as the plastic material is more resistant than that of a football or rugby ball, and there aren't any seams for water to leak into. What's more, they're cheap, or oftentimes free at events, so if you lose one to the waves, just grab another!

Beach Volleyball
Many beaches around Gulf Shores and Orange Beach offer nets for a traditional game of beach volleyball. It's one of the most popular beach activities here on the Gulf Coast. If you're not the biggest fan of the game itself, there are other similar games that can be played with a volleyball and a net. One such game is Elimination Nukem, also known as Nukemball, which requires the same equipment as a typical volleyball game: just a ball, a net, and a group of people ready to have some fun. Split the group into two, each team on either side of the net. The starting team throws the ball over, and whoever catches it on the other side has up to three seconds to throw it back without moving their feet. If someone drops the ball, or fails to catch it, whoever is closest to where the ball fell is out, and steps off the court. An optional rule states that if you catch the ball with one hand, you get to bring back someone back in.

Wiffle Ball
Lastly, there's always the tried-and-true wiffle ball. Bring a wiffle bat with some wiffle balls, and use items you already have--such as boogie boards, folded towels, and coolers-- as your bases. Your game is sure to attract the attention of others, and everyone can participate in this variation on the American classic baseball.

Enjoy your stay in Gulf Shores or Orange Beach and rest assured that your condo rental will have plenty of room for your beach sports gear!